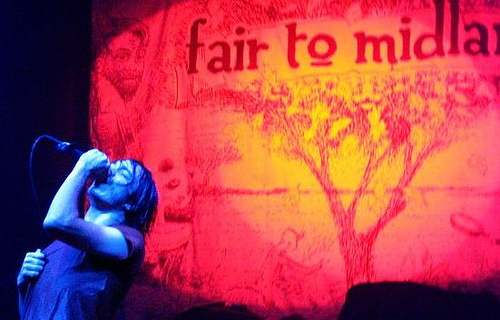 It was a great gig, and the band played with passion from the beginning to the end.  As I had expected, Fair to Midland’s a show of frontman Darroh Sudderth and his supporting act — and rightfully so.  Cocky and gleefully malicious, Darroh is a force to be reckoned with, crooning sensitively one moment and unleashing guttural growl the next.  He’s like a manic chameleon, and a really great frontman.  During “Dance of Manatee” he climbed up from the speaker stack and hang upside down from pipes running on the ceiling — a signature shtick, I understand, but the crowd went wild nevertheless.

To me, the most impressive part of this band was its use of dynamics — I was wondering if they were going to pull off the subtle and intricate parts of their songs live, which they did in spades.  I don’t know how the stage volume was, but it’s not that easy for a metal band to pull off quiet passages, let alone those that sit back-to-back with loud, pounding parts.  Darroh’s pitch wasn’t perfect, but hey, it was better than I expected and definitely close enough for a loud club gig.  (Club gigs are very hostile environment for singers)  I wondered if the band’s other creative force, keyboardist Matt Langley, was going to come to the fore more often, but he pretty much stayed the supporting cast.  This band knows where its strength is — their charismatic frontman — and they’re sticking to it.

The most heartening moment of the night, though, was after the show, in the merch booth, where the guitarist Cliff Campbell manned the cash register immediately after the show.  He wore such a genuine and personable smile while serving his fans.  The rest of the band, too, carried themselves professionally and I saw little rock-star posturing (Darroh did, but a frontman should lean on cocky side anyway).  I got the impression that these guys are diligently applying themselves to their career.

The only complaint I have is that the gig was rather short — clocking in at about one hour.  It was very reasonably priced and they started on time, plus it was a 16+ show, which may have had some restrictions on how late the band could play.  I also wondered if Darroh’s vocal antics are hard to sustain over a long gig.  They delivered their goods in a tight, focused set, not wasting time in-between songs, but I was left wanting at the end.

Other than that, good job, guys — you are a band worth rooting for.

(photo courtesy of msleading: itwas not taken at the gig I saw)